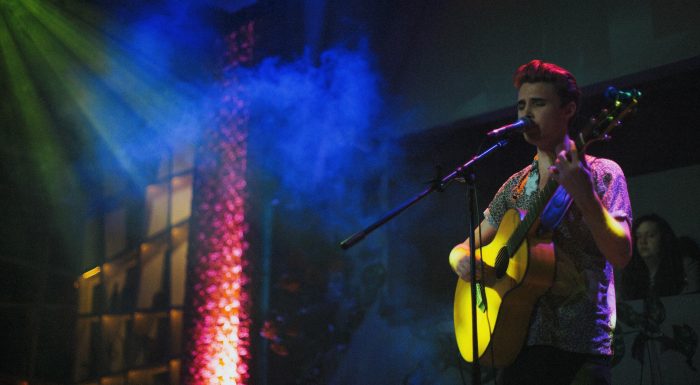 Dressed in a slim fit jacket, complete with slicked-back hair and a salad from Ascension Coffee, 21-year-old Sam Harvey appears to be a man of simple pleasures on first glance. Although this can be assumed of anyone possessing a youthful disposition, Harvey’s abilities as a singer, guitarist and creative thinker all point to a plentiful future in music.

And his story begins right here in Dallas, Texas.

“My very first gig was when I was 14,” Harvey said, reminiscing on his beginnings as an opener for his brother’s band at a coffee shop in The Colony. Thinking about the first few musicians he encountered in Dallas music culture, “The scene wasn’t really progressing since most of the people [in it] were just playing gigs recreationally.”

Originally a native of Orange County, California, Harvey’s family moved to Dallas when he was six years old, citing Texas’ economy as major migration factor. He was raised in Lewisville from then on, playing multiple church gigs as a drummer while emulating his father, a Purple Heart veteran and drummer by trade.

“His day job was being a professional hairstylist,” Harvey recalls, “but as a drummer, he’s played for Little Richard, the Hues Corporation [of ‘Rock the Boat’ fame] and the movie ‘Blacula.’”

Carrying his father’s passion for music in his own life, Harvey fondly remembers growing up on the Motown Sound and its contemporaries – specifically Earth, Wind & Fire, Chicago, Tower of Power, Etta James and Jackie Wilson.

“The distinct styles of Earth, Wind & Fire and Tower of Power inform how I approach chord progressions,” he said, also naming Michael Jackson as an influence on his creativity. Much like Jackson, Harvey roots his discography in soul and R&B with an electronic edge.

As he embarked on adulthood, Harvey met his lifelong producer Brandon Saiz – a 23-year-old wunderkind with experience creating records for various genres in his makeshift studio.

“It’s very rare to meet a creative who gets it,’” Saiz said. “But when Sam and I met, it was instant magic.”

While their work relationship has spun over two years and hundreds of songs, they produced over twenty songs within their first eight months alone.

“I heard [Sam] sing at a show and immediately I went, ‘I need to work with him,’” Sheets said, a now 26-year-old manager with more professional experience in the music world than most young adults dream of.

Sheets threw down approximately $1,600 on a trip to Miami, Florida, following Harvey and his team to Sean Combs’ REVOLT Music Conference. It was there when Sheets and Harvey began networking with industry elites together, later gaining the attention of Bad Boy Records President Harve Pierre.

“We literally met [Harve] in the middle of him eating chicken fingers,” Sheets said. “So we played some of Sam’s music and he began punching and shaking people because he liked it so much.”

Harvey’s music not only resonated with Pierre, but with the entourage of Sean Combs himself. Through Pierre’s connections, Sheets and Harvey attended Combs’ yacht party on a following night and played their work in front of Combs, his family, 2 Chainz and many others to much positive reception.

Upon returning to Dallas and taking a second weeklong trip together – this time to the Big Apple – Harvey and Sheets’ cooperation gestated into a true partnership. It helped that both men occupied an austere New York apartment due to depleted expenses from their Miami endeavors.

“It was a high stress environment with hardly any food or sleep,” Sheets recalled, noting how Harvey slept on a rollaway and wore clothes from a trash bag. “The trip taught me Sam’s work ethic was stronger than any musician’s I had managed before.”

Sheets eventually moved Harvey and Saiz into his Dallas residence – while paying off the rest of Saiz’s rent – for both men to have proper living quarters and hone in their talents comfortably. Flash-forward months later and Harvey is now playing weekly shows throughout December to eager audiences at the swanky downtown dinner theatre Don’t Tell Supper Club. But that’s not all. He is also dropping singles triweekly and books openings at legendary Dallas venues such as the House of Blues.

Harvey and his team plan to remain independent artists, start a full-service label called Twenty Odd Records and break into the mainstream in 2019.

“Fear of the bottom never gets you to the top,” Saiz advises other aspiring producers and musicians, while Sheets forewarns. “No one’s going to do it for you. A lot of [people] look for someone to get them somewhere and that’s not how the world works.”

Reflecting on his eventful journey, Harvey suggests understanding “what you need to do to get to where you need to be.”

You may also catch some of his upcoming gigs at Don’t Tell Supper Club.