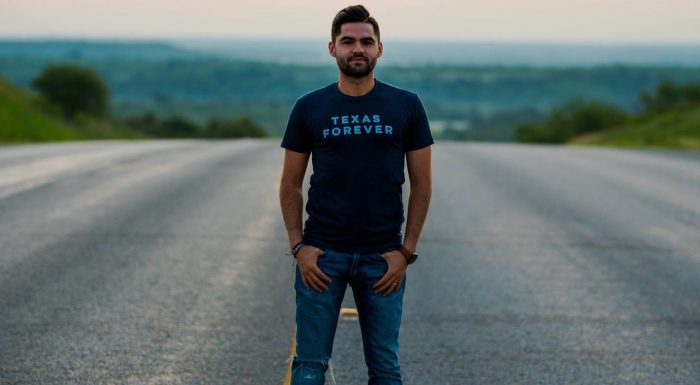 Behind the lens with Michael Gonzalez

We are a Dallas based full service public relations and advertising agency. We take our clients and their needs seriously, and work day-in and day-out to exceed their goals, and bring their dreams to a reality.

Our client Kruto Vodka recently embarked on creating two branding campaign advertisements, and when choosing the right video production company to capture the essence of the award-winning Ukrainian vodka, they remained loyal to one company that understands their vision.

Michael Gonzales, the mastermind behind the latest commercial for Kruto Vodka, and founder of Visual Voice Media (VVM), took a moment to chat with JWA about his creative process, how he approachs a new idea, and finding the right balance between client and creativeness.

JWA: To get started, who is Visual Voice Media?

Michael Gonzalez: We are a full service media production company, but we prefer to call ourselves creators. I’m really blessed to have an incredible team of creatives that work around the clock to bring our visions, and those of our clients, to reality. Ryan Reed and Riley Flores are my foundation. They are my partners-in-crime, if you will, and without them VVM wouldn’t exist. 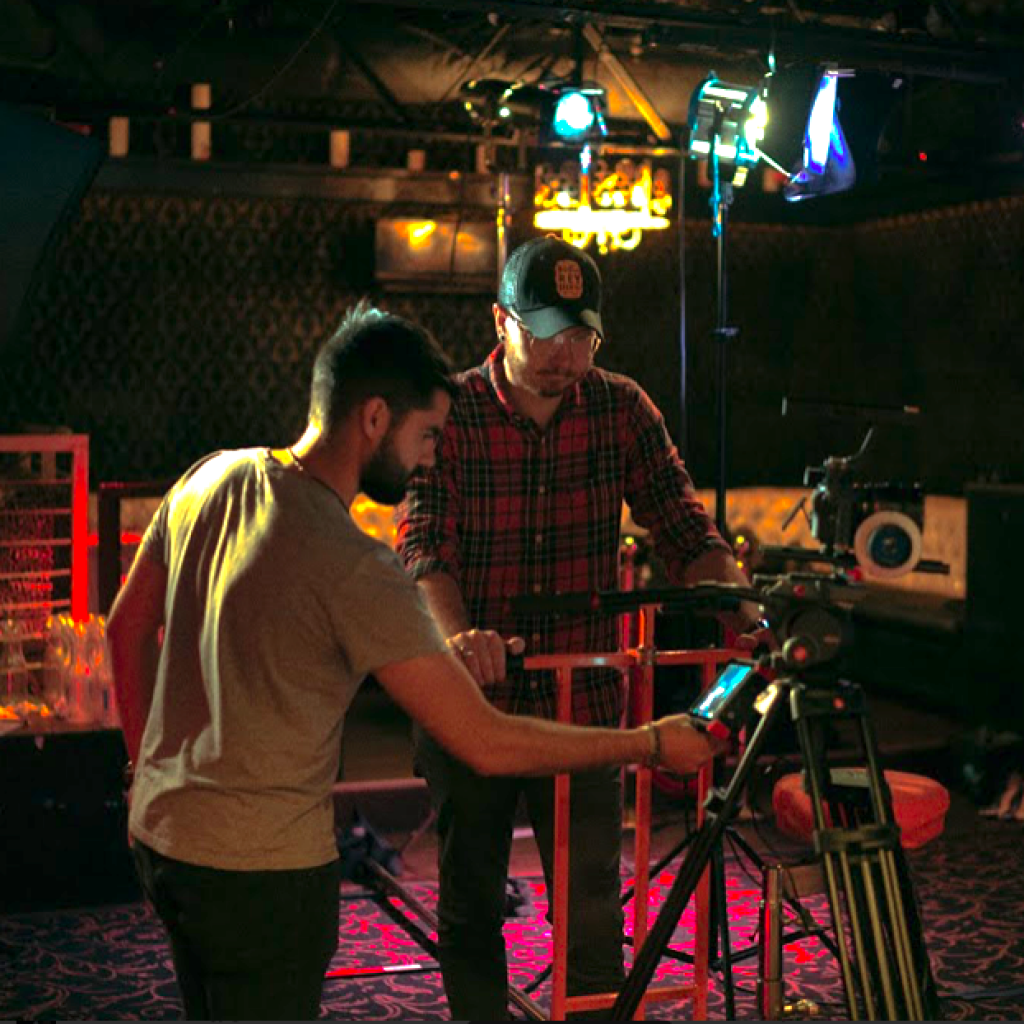 Michael Gonzalez and Ryan Reed setting up the shots for the yet-to-be-released Kruto Flawless commercial.

JWA: What was your thought process coming up with concept for Kruto Red?

MG: We thought about the slogan Kruto Makes it Smoother and from there we wanted to make sure we got that point across – that even in the craziest of nights, Kruto makes everything smoother. Ryan took the lead in developing the script and storyboard for the Kruto Original commercial, and really set in motion the overall aesthetic that we created. He’s truly an idea master and a genius when it comes to creating visual sentiment and on-set ambiance.

JWA: Was there any significance behind the red Edison bulb?

MG: Our hope was to create a visual representation of the party-goer who doesn’t stop when midnight strikes. The aura of the bulb represented things that take place in the middle of the night – something that appealed to the younger crowd, so we used it as a prop to add subtext, and a little bit of character to the scene. 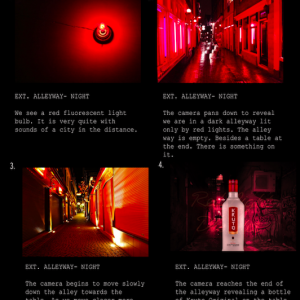 JWA: What was your overall message you wanted to convey with the ad?

MG: You will notice that in the beginning of the short clip, there are no concrete visuals. You see a flicker in the distance. Through the fog rolling, you can tell that there is something that is drawing you in, but you can’t exactly make out what is it.

We worked closely with JWA and the Kruto team to visually capture the feeling of youth – of unabridged freedom to celebrate life and live in the moment. We purposefully chose not to include actors in this commercial, as we wanted the viewer to feel as though they were walking down an alley, while the city slept, in search of the afterparty. We wanted to bring the viewer into the ad, as if they we walking along with the camera – pursuing the next stage of the night.

It worked well. We had a crew of five that would set up the shots and assist with the special effects. It is much more difficult to capture fog on camera than people would think. We changed filters a number of times to get the perfect color and effect. We shot that particular scene for about six hours to get the exact movement that we wanted, and to convey the overall message that even in the craziest of nights, Kruto makes everything smoother. 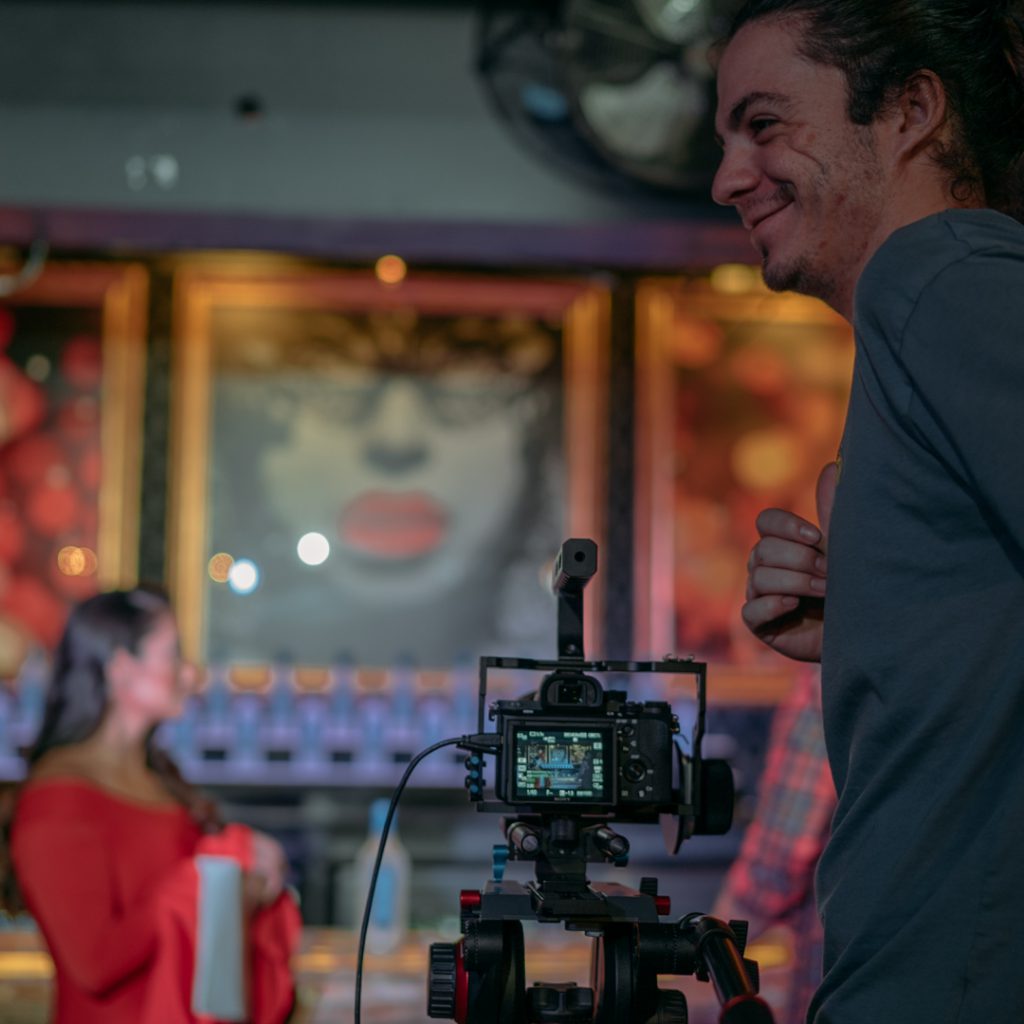 JWA: What are some things you consider when approaching a new project?

MG: The first thing is research. We’ve had the pleasure of shooting for Kruto a number of times, so we really understand the brand and the audiences that they are trying to reach. They’ve hired us to shoot sponsor recaps like the Fashion Group International’s most recent event, Night of Stars, and the Mario Gallegos fashion show. the With new clients, we spend a good amount of time collaborating with the client about their vision and narrative to better understand them, and what end-game they are seeking with the project. What is the focus? What is the most creative way possible to tell their story? Ultimately we focus on telling the story in the most visually pleasing way possible.

We always create a storyboard for the client, so that they can get an idea as to what we have planned for the shoot. This works well for both parties because we can develop consensus prior to the shoot, in order to avoid costly mistakes or the need to re-shoot. Pre-production is just as important – if not more important – than actually filming the project. Once we’ve wrapped, we’ve wrapped, and that’s the end. I personally think that a lot of the magic happens in post-production where we get to bring all of the elements together. Watching the dailies on the viewer while filming will tell you what you are filming in the moment, but honestly it is when you get the footage back to the studio that you really go, “we got it.”

JWA: Do you ever encounter roadblocks when on set?

MG: [Laughs.] You have no idea! We go into every single production fully anticipating glitches and hiccups. It is the nature of the business. We try to avoid day-of issues as much as possible, as every minute we aren’t filming is both costly and sets the next set-ups back. Many times when we are filming (especially outdoors) we are in a race against time with good lighting. Luckily, I have Riley who is an incredible problem-solver. He can encounter any problem, and he ALWAYS finds a solution to keep production moving and to stay on schedule.

JWA: How closely do you work with the client?

MG: Again, we have shot probably 10 videos for Kruto, so we have developed a great relationship with their team. They are incredibly easy to work with, but they certainly have a vision and expectations. With all of our clients, we strive to work closely with them so that the project is a true collaboration – with open lines of communication – so that we can constantly get their feedback. Every client is different though. Some really want to be involved and others give us complete creative control.

JWA: How do you merge your creativity with the vision of the client?

MG: [Laughs.] That’s the million dollar question. I’m a filmmaker – a creative – so on each and every project we work on, I have a vision on how I want it to look and feel. At the end of day, however, it is the clients’ opinion that matters, and we aim to please. Many times we compromise, and sometimes I stick to my guns, knowing that I can create a compelling visual representation of their brand that is appealing to both them and their respective audiences. We always look at the story and what we are trying to share with people and we think to ourselves, “what is the best way to do that, and how can we make it resonate with something they have felt before?”

Keep up with Michael Gonzalez and his team at Visual Voice Media on Facebook, Instagram and Vimeo. See all of the videos that they have created for the vodka brand on Kruto’s YouTube.

To learn more about JWA and our services, visit us on Facebook and Instagram. Have questions? EMAIL US.